C. S. Lewis and the Remythologization of Christianity

It may be that C. S. Lewis’ greatest legacy will be his remythologization of Christianity. He is well known for his (flawed) apologetics and popular children’s literature, but it is the “baptized imagination”—instigated by the works of George MacDonald, according to Lewis—which infuses all of his works that is really the mark of his genius. I think we are now in a position to best appreciate this aspect of Lewis’ work. His apologetics have faded from view, and Hollywood has co-opted his Narnia books for huge profit. This is the perfect time to rediscover his lesser known works or to read his familiar books (such as the Chronicles of Narnia) in a new way.

Enter Dr. Michael Ward. I first met Michael during my time at Wheaton College. I was a teacher’s assistant for Wayne Martindale, one of the foremost American scholars of Lewis. My knowledge of Michael’s work was augmented by a trip during the summer of 2003 to Oxford, where we heard lectures on Lewis and visited The Kilns, among other places. 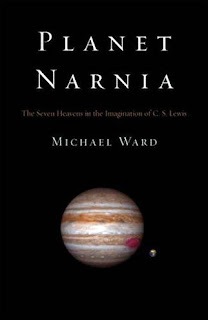 In his new book, Planet Narnia, Dr. Ward argues the following thesis: Lewis based each of the seven Narnia books on one of the seven medieval heavens. As you will recall, the medieval church accepted Ptolemy’s model of the solar system, in which the Earth was at the center. Each of the planets had spiritual significance, and each influenced life on Earth in some divinely ordained way. In this era, astronomy and astrology were indistinguishable. The mythology of the seven heavens was integral to medieval Christian faith—hence the church’s vehement rejection of the Copernican system—and Lewis harbored a secret love for this mythology over against the materialistic, scientistic conception of the heavens that now dominates the modern era. Ward brilliantly shows how each of the Narnia books corresponds with one of these heavenly bodies, and he builds his case not only on careful readings of the books, but also through analysis of Lewis’ more “academic” texts, such as The Discarded Image.

In a new article for Books & Culture, “C. S. Lewis and the Star of Bethlehem,” Ward discusses Lewis’ disdain for the disenchanted “mythology” of modernity in favor of the more Christian—even if less scientifically accurate—“mythology” of the seven heavens. His fiction, including the Ransom trilogy as well as the Narnia books, and his poetry were thoroughly interested in what Lewis himself called “the whole planetary idea as a mythology.” Ward writes:

Since the Copernician revolution, the heavenly bodies had been steadily evacuated of spiritual significance until they were regarded as no more than large aggregations of rock or gas. Readers of Narnia will remember an exchange in The Voyage of the "Dawn Treader" during which Eustace is rebuked by Ramandu for claiming that "In our world a star is a huge ball of flaming gas": "Even in your world, my son, that is not what a star is but only what it is made of." Because the pre-Copernican model of the cosmos viewed the planets as more than merely material it was a model worth keeping in mind. It was, in this sense, a more Christian model than the Newtonian or Einsteinian versions which have succeeded it.

Emphatically, the pre-Copernican model of the cosmos was a Christian model not despite, but because of, its acceptance of astrological influence. Lewis valued its astrological aspect not because he considered astrology to be literally true, but because astrology represented a spiritual reading of materiality. ...

Following the Copernican paradigm-shift, astronomy and astrology became gradually distinct and the former prospered while the latter fell on hard times. Astronomy is now a respectable science. Astrology, in sharp contrast, has become the label of a subject that is generally thought to deserve no serious consideration. But to Lewis, as a scholar of the 16th century, it would have meant something very different: it meant that the heavens had spiritual significance, however that was conceived. He was not convinced that Copernicus' discovery of heliocentricity required the planets to become spiritually insignificant. He thought that disenchantment was an aspect of the "mythology that follows in the wake of science."

Lewis, as Ward explains, is less concerned about scientific accuracy than he is about seeing all reality through a “baptized” lens—one which recognizes the universe as infused with spiritual significance, though not necessarily in the same astrological way common in the ancient world. One might say Lewis’ concern throughout his fiction is to recapture the theological imagination lost through the Enlightenment captivity of Christianity. Lewis is thus the pure antithesis to Bultmann: rather than coordinating Christian faith with scientific discoveries, Lewis would rather have us coordinate reality with the Christian faith. He accomplishes this through his fiction, which is no escape from the world but a reinterpretation of it. His books are an attempt to bring back the enchantment lost through the rise of modern science. Against any demythologization, Lewis is a modern re-mythologizer of Christian faith.

In this context, I should also mention Wayne Martindale’s book, Beyond the Shadowlands: C. S. Lewis on Heaven and Hell. Martindale shows how Lewis both demythologizes and remythologizes heaven and hell through his books.

Camassia said…
It's interesting, and significant, that when the planets Uranus and Neptune were discovered there was some argument going on about whether to keep naming them after gods or whether to name them the way Europeans had been naming newly discovered earthly lands -- that is, primarily after their discoverers and their patrons. Herschel wanted to name Uranus after King George, and said, basically, that it was fine to name planets after Roman gods back when people believed in that stuff, but this is now. The fact that astronomers have gone on giving heavenly bodies mythological names speaks to the reverence we still have for the skies, I think.
February 17, 2008 8:56 PM

Anonymous said…
CS Lewis lived in a time when the mind of Western man had already, and for a long time, been thoroughly secularised. This was the significance of Nietzsche's famous god is dead declaration.

And in a time when Western culture (such as it was) had essentially destroyed itself in WWI and WW2.

Put in another we everything has long been fragmented and broken and emptied of any spiritual content and possibility.

We are each a fragment of Humpty Dumpty's broken shell lying scattered on the ground.
And from a thus fragmented and fragmentary point of view, we (and CS Lewis) try to resurrect or re-mythologize something of which which have no real knowledge---the knowledge of prior unity with the Divine Source Condition.

And besides the various Christian mythologies were "created" in the long ago child-hood of humankind when it was presumed that we were surrounded, and perhaps protected by the parental deity who lived above the crystal vault held in place by the stars.

Such a "cosmology" was long ago disproved by both Newtonian and Quantum Physics---especially Quantum Physics which tells us that everything, including our bodies are ever-changing patterns of Primal Energy or Light.
February 19, 2008 12:48 AM

Jason Fallin said…
It's interesting that you write of Lewis' understanding that the material world is filled with spiritual significance in light of your upcoming blogs on Balthasar given his notions of form and splendor. There seems to me to be an incarnational connection between the two that Balthasar exhaustively fleshes out, no pun intended.
February 22, 2008 10:44 AM