I have decided to come out of blog semi-retirement to contribute to Rachel Held Evans’s Week of Mutuality. My contribution will be an essay that I wrote in the spring of 2011 on the topic of trinity and subordinationism. As is my modus operandi, the essay is too long for a single post, so I will split it up into several smaller posts. 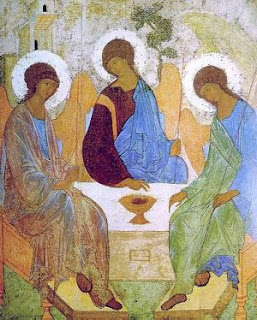 A brief word on the context of this essay is in order. Though I live (for the moment) in Princeton, my wife and I are from Portland, Oregon. One of the largest and most well-known churches in Portland is Imago Dei, and we have friends and family who are part of this community. Over the past few years this community has wrestled with the question of women in ministry. A couple years ago I was asked to contribute to a response to Imago Dei’s position paper on this question, which put forward a position of so-called “soft complementarianism.” In response to this document, I drafted a hundred-page document arguing for a position I called “radical equality” on the grounds of a missional hermeneutic. I am currently working on expanding that into a full-length monograph, so I will not reproduce that material here.

We believe that both men and women are equally made in the image of God (Gen. 1:27) and equal partners in Christ (Gal. 3:28). As in the Trinity, there is equality of persons, but diversity in function. There is a relationship between the equal persons of the Trinity that includes leadership and submission. God the Father sends the Son and the Spirit (Isa. 48:16; John 5:23-36; 14:26; 15:26). The Son and the Spirit submit to the Father, but each is equally God. All believers must joyfully submit to the triune God.

It is unfortunate that a response to this line of inquiry is even necessary. The position is so theologically dubious that one can only explain its prevalence among conservative evangelicals as a sign of the theological vacuum that exists within evangelicalism today. It is truly a dire state of affairs within the church when Christians appeal to the doctrine of the trinity to support gender subordination. Unfortunately, there continues to be a need to demonstrate the obvious—in this case, to demonstrate why this position is theologically deplorable. We can only declare a firm and resounding “No!” to this line of thinking.

I am, of course, not the first to write about this problem. Kevin Giles has made it his mission to expose this error of modern evangelicals, especially in his recent books, The Trinity and Subordinationism, and more recently, Jesus and the Father: Modern Evangelicals Reinvent the Doctrine of the Trinity. The latter book is especially relevant to my essay, since the last chapter discusses subordination and obedience in Karl Barth’s theology (though I wrote my piece without knowing about this book). Giles is not at all a Barth scholar, and he admits reading Barth more or less for the first time in researching for this book. His chapter bears all the marks of a Barth novice and lacks the historical and textual nuance necessary to appreciate what Barth is trying to achieve. Giles is fully invested in traditional orthodoxy, and this makes it hard to enter into the strange world of Barth’s theology. That being said, he offers a charitable reading of Barth that ranges across the whole Church Dogmatics, and he is to be commended for engaging Barth so carefully. My contribution here aims to support Giles’s criticism of modern evangelical theology, but through a more sophisticated reading of Barth.

Besides the work of Giles, there are also the recent Kantzer Lectures by Bruce McCormack. The first lecture addresses the state of the doctrine of God in contemporary evangelical theology. McCormack looks at two problems, one of which is the use of the trinity to support gender roles. His analysis of the problem corresponds very closely to my own—not surprisingly, since he is my Doktorvater and the one who has influenced me the most in all matters theological. My entire approach to this problem I owe to him. That being said, I wrote my piece a few months before he gave his lecture, and I was not aware of its content before he presented it.

In responding to the evangelical position on trinity and gender, I will first articulate what I think is the most persuasive version of the eternal subordination of the Son, viz. the position advanced by Barth. I will demonstrate that Barth’s account, despite its apparent similarities to the complementarian argument, absolutely precludes drawing any conclusions about male-female relations. In fact, Barth’s account of trinitarian subordination actually undermines the evangelical position, even though, paradoxically, it is an instance of ontological, and not merely functional, subordination. I will then address the two presuppositions upon which the evangelical position is based: (a) a “social” doctrine of the Trinity, and (b) a divine-human analogy of being (analogia entis). I will further demonstrate that these same presuppositions have been and continue to be used in support of egalitarianism, but I will conclude by arguing that neither presupposition is theologically valid. In short, my thesis is this: the doctrine of the Trinity tells us absolutely nothing regarding the question of gender roles and women in ministry. The Trinity has no relation to the debate between complementarianism and egalitarianism. Any use of the doctrine for these purposes is indicative of a mistaken understanding of the triune being of God.

The outline of this series:

1. The Immanent and Economic Trinity: Thinking Responsibly about God

3. The Problem of Social Trinitarianism

4. The Problem of Analogy

Matthew Frost said…
I look forward to the series, at least in part because of how agog I am at the material of the cited paragraph from Imago's statement. It's not unfortunate that a response is necessary -- the argument put forward is itself unfortunate. It never ceases to amaze me how much gets shoehorned into that "but" in "equality of persons, but diversity in function." And there is a serious deficit in the sentence itself, if it is taken to compromise the one being of God in favor of any idea that the works of God can be subdivided across persons. But worse, it isn't about function at all! What it grants in being and modifies in action, the following sentences immediately retract. A relationship of equality that includes hierarchy? Bureaucracy and formal organization in democratic society do horrible things to twist the Fathers here. Procession and mission that uncritically become submission, which submission becomes directly parallel to human submission to God? And this grounds the further subordination of nominally equal human persons? So the divide between God and the creature is not only taken up and reproduced within the godhead, but also taken down and reproduced within creaturely being? Where does one start?!

I'm having my own fun wrestling with Barth's trinitarian ontology in a different context, and I look forward to seeing yours in this context. You're better-placed than I am to handle the players in this dialogue.
June 07, 2012 12:04 PM

Anonymous said…
my understanding does not come for Karl Barth or any other ... but it is what I see in the text itself? I am no Scholar, however, I wont be intimidated by them either. I believe you are wrong. Your thesis is: the doctrine of the Trinity tells us absolutely nothing regarding the question of gender roles and women in ministry. The Trinity has no relation to the debate between complementarianism and egalitarianism. Any use of the doctrine for these purposes is indicative of a mistaken understanding of the triune being of God.

If then, we are made in the Image of God and therefore are called to be imitators of God then this must(rationally) include all members of the trinity and that how and in what way they choose to function should be of utmost importance to us... so that we may do as they do and be as they are... we cannot say that the Godhead is off limits in how we understand how we are to live and behave in family and Church... sorry but that does not sound logical.
June 10, 2012 9:16 AM