My Forthcoming Book: The Mission of Demythologizing 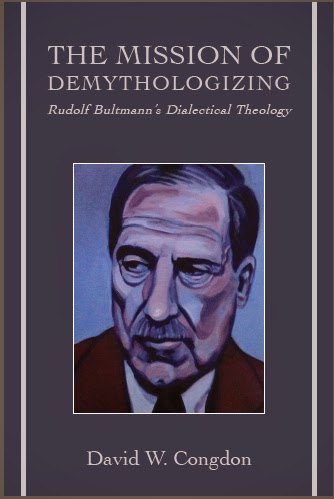 My nearly 1000-page study of Rudolf Bultmann’s theology and hermeneutics is nearing publication. The Mission of Demythologizing: Rudolf Bultmann's Dialectical Theology is scheduled for release on June 1 from Fortress Press.

You can preorder the book now for 40% off the list price, so pick up your copy now! [Update: the 40% discount is over for now.]

Here are the endorsements for the book, for which I am most grateful:

“In this substantial work, David Congdon has produced the most creative and scholarly study of Rudolf Bultmann’s theology for more than a generation. In refuting the standard charge of a capitulation to modernity, he shows how Bultmann’s demythologizing project is rooted in a robust set of convictions about God as subject and the act of faith as existential and practical. This reassessment of Bultmann as a dialectical theologian is long overdue. In an increasingly secular culture which too readily dismisses Christian faith as ‘believing six impossible things before breakfast,’ Congdon’s work promises to rehabilitate Bultmann as an important resource for theological understanding.”
—David Fergusson, University of Edinburgh

“The Mission of Demythologizing systematically deconstructs the slogans with which New Testament scholars have long caricatured Rudolf Bultmann's hermeneutic. Yet this is no mere demolition job, as David Congdon replaces the stereotype with a Bultmann fully invested in a missiological hermeneutic on behalf of dialectical theology. This book and the discussion it generates will be with us a long time.”
—Beverly Roberts Gaventa, Baylor University

“This is a quite remarkable volume. It seeks to overturn two generations and more of scholarship on the theology of Rudolf Bultmann, not only revisiting and reconceiving the relationship between Bultmann and Karl Barth, but also revisioning and rehabilitating Bultmann's program of demythologization. The bold trajectory of argument which Congdon advances arcs round the central claim that Bultmann’s dialectical theology and demythologising programme represent a fundamentally missionary endevaour. To evidence this ambitious claim, Congdon engages with the full diachronic range of Bultmann’s corpus, and thereby interacts with the full range of attendant issues, including the crucial relationships between kerygma and hermeneia, objective and subjective, and mission and liberalism. The result is a painstakingly researched and lucidly presented work that is both compelling and a joy to read, one which evidences the kind of depth, insight, and passion that are the hallmarks of the very finest research in theology. This volume will make an immediate and significant contribution to the reception of the work of Bultmann (and of Barth); but more than this, the constructive and generative agenda which it sets suggests that the work of Protestant theology is far from done and that tales of its demise may be somewhat premature.”
—Paul T. Nimmo, University of Aberdeen

“David Congdon's work is essential reading for anyone interested in Rudolf Bultmann, Karl Barth, or Christian theology in the modern period. Meticulously researched, lucidly written, and brimming with constructive energy, this is a work of enormous sympathy, intelligence, and creativity.”
—Adam Neder, Whitworth University

“This book is one of the most important and perceptive studies on Rudolf Bultmann and his often misunderstood program of Entmythologisierung (demythologizing) ever written in English.”
—Michael Lattke, Emeritus, The University of Queensland, Brisbane, Australia

“For two generations theology has ‘gone around’ Bultmann rather than through him. This evasion has led either to scholarly retreats into the false securities of the old historicism or to circling the wagons of Christian traditionalism. In this brilliant book worthy of its subject, a voice from the youngest theological generation now presents a fresh understanding of Bultmann’s daring missional program. David Congdon urges the church to look outward and forward by interpreting the news of Jesus Christ on the shifting frontiers of an emerging world.”
—James F. Kay, Princeton Theological Seminary

“Comprehensively researched and clearly written, this volume provides a convincing reinterpretation of Bultmann’s thought as well as a compelling account of its constructive significance for the future of missional theology and hermeneutics. This is an impressive interdisciplinary contribution to the literature of modern Christian thought by one of the most promising young theologians at work today.”
—John R. Franke, Evangelische Theologische Faculteit, Leuven, Belgium
Email Post
Labels: Bultmann