The Mission of Demythologizing is now available 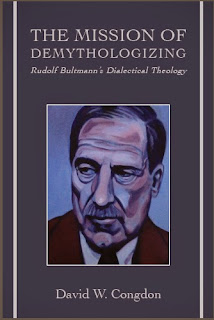 My book, The Mission of Demythologizing: Rudolf Bultmann’s Dialectical Theology, is now available from Fortress Press. The book is an expanded version of my dissertation. My thesis is that, even in his later hermeneutical work, Bultmann never abandoned the dialectical theology he shared with Karl Barth in the early 1920s. I argue that the famous program of demythologizing is the hermeneutical fulfillment of dialectical theology. Bultmann’s program of existentialist interpretation is the extension of Barth’s theology into the realm of hermeneutics.

Here is a selection from the opening chapter where I set up the problem, what I call the “myth of the whale and the elephant.” Attentive readers will notice that this is a play on a section from Bultmann’s programmatic essay, “New Testament and Mythology” (compare the paragraphs below with New Testament and Mythology and Other Basic Writings, ed. Schubert Ogden [Fortress, 1984], 1–9).

The theological world-picture of the relation between Karl Barth and Rudolf Bultmann is a mythical world-picture. According to this picture the world is a two-part structure, with Barth on one side and Bultmann on the other, incapable of meaningful communication. Barth is, to some, the champion of the gospel against the errors of modern liberalism, while to others he was an important figure early on whose theology eventually lapsed into yet another ossified dogmatic edifice. Bultmann is, for a select few, the one who made the gospel meaningful within the modern world, while for most others he was the liberal exegete par excellence who eviscerated the kerygma of any meaningful content. According to the dominant perspective within this picture it was Barth who rescued theology from the clutches of extrabiblical presuppositions and so-called natural theology, while Bultmann was the one who made anthropology—and an individualist, existentialist anthropology at that—the starting point for theological discourse, thus subordinating theology to philosophy. All of this is mythological talk, and the individual motifs can be easily traced to the mythology of Anglo-American neo-orthodoxy. Contemporary Christian academic discourse is therefore confronted by the question whether, when it discusses these two figures, it is really Barth and Bultmann who are under discussion or whether it is in fact asking people to acknowledge a myth about them in place of an actual understanding of their theologies. It has to face the question whether there is a truth about Barth and Bultmann that is independent of the mythical world-picture, in which case it would be the task of responsible theological discourse to demythologize the received message about these two theologians.

It is the claim of this author that there is indeed such a truth, and that we are charged with the task of demythologizing the myth of the whale and the elephant. Bultmann himself always insisted that demythologizing is not the elimination of myth but rather its interpretation and translation. Our task today is to demythologize the relation between Barth and Bultmann, and thus to hear again their joint witness to the gospel within a new theological situation. Moreover, it is impossible to repristinate an earlier world-picture, in which the world was a single story with Barth and Bultmann in a joint alliance against liberalism. We must address the mythical world-picture by going through their later writings, not by ignoring them. Such a task cannot be carried out by simply reducing the amount of mythology through picking and choosing which aspects to demythologize. We cannot, for example, reject the notion that Bultmann abandoned dialectical theology and still retain the view that he subordinates the kerygma to Heideggerian existentialism, nor can we reject the claim that Bultmann subordinates theology to anthropology and still retain the idea that Bultmann denies that God acts in history. We can only completely accept the myth of the whale and the elephant or completely reject it. If the genuine theological insights and contributions of Barth and Bultmann are to remain valid for us today, there is nothing to do but demythologize this myth. (12–13)