A New Introduction to Rudolf Bultmann 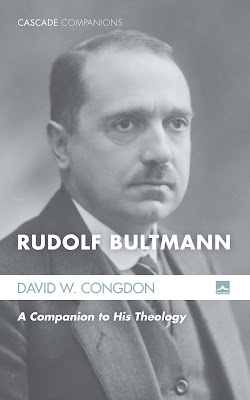 In the months after I finished my Fortress Press monograph on Rudolf Bultmann’s theology, The Mission of Demythologizing, I began working on a short introduction to his thought for undergraduate and lay readers. The result was published this week by Cascade Books as Rudolf Bultmann: A Companion to His Theology. The book is on sale through November 15 for 40% when you use the code: Bultmann.

With this work I wanted to give people the tools they need to read Bultmann profitably. While all introductions to Bultmann (apart from readers) are now out-of-print, one of their main drawbacks was a focus on the sources of Bultmann’s theology. They would discuss Heidegger, Herrmann, Barth, form criticism, and other influences, with the expectation that knowing the historical background and source material would enable the reader to dive into Bultmann’s texts.

The problem is that Bultmann is a highly synthetic theologian. He is not simply a composite of various influences. The whole is far greater than the sum of its parts.

For this reason I opted instead to approach Bultmann thematically. My guiding question throughout was: how does Bultmann himself think theologically? My aim, in other words, was to discern the nuts and bolts of his thought, to distill his interdisciplinary and wide-ranging work to its essence.

I ended up with ten chapters on the following themes:

In terms of order, the key decisions are to place eschatology up front and advent at the end. I am convinced that the only way into Bultmann’s theology is through the question of eschatology. This is how he begins his Jesus Christ and Mythology, and there is a reason for that: eschatology is both the problem that theology attempts to answer and the norm by which theology develops the answer. Eschatology is the theological nodal point at which the various streams and layers of Bultmann's thought converge to form a coherent image.

Advent is the pastoral and practical counterpoint to eschatology. In that concluding chapter I survey Bultmann's sermons to see the centrality of and the development in his discussion of Christ's advent. As I have argued on this blog before, Bultmann is the modern theologian of advent par excellence. His entire theology is suffused with eschatological expectancy. I argue in this final chapter that he is a theologian of “perpetual advent.”

Bultmann is a challenging theologian. His thought is scattered among various short essays. He ranges across a number of different disciplines and methodologies. He is what Barth would call an “irregular” theologian. For this reason, there is a need for a guide to his thought that brings systematic clarity to his body of work. This is what I have aimed to provide.

Bultmann presents the question regarding the essence of the kerygma . . . most clearly in the passage from his letter to Heidegger in 1932 quoted above. The letter continues as follows:


It is becoming increasingly apparent to me that the central problem of New Testament theology is to say what the Christian kerygma actually is. It is never present simply as something given, but is always formulated out of a particular believing understanding. Moreover, the New Testament, almost without exception, does not directly contain the kerygma, but rather certain statements (such as the Pauline doctrine of justification), in which the believing understanding of Christian being is developed, are based on the kerygma and refer back to it. What the kerygma is can never be said conclusively, but must constantly be found anew, because it is only actually the kerygma in the carrying out of the proclamation.1

According to Bultmann, the NT does not “directly contain” the kerygma, but rather the statements in the Bible are based on and bear witness to the kerygma. The distinction here between kerygma and scripture corresponds to Karl Barth’s distinction between revelation and scripture. In his doctrine of revelation, Barth presents what he calls the “threefold form” of revelation as the word of God revealed (Jesus Christ), written (scripture), and proclaimed (contemporary preaching).2 Barth’s point is that God’s self-revelation, definitively actualized in Christ, is qualitatively distinct from the written and spoken testimonies to it. The sovereign freedom of God precludes the collapse of revelation, as the act of God, into scripture, preaching, or theology as the human witnesses to revelation—scripture being the normative and authoritative witness over church preaching and teaching.

Like Barth, Bultmann refuses to collapse kerygma and theology, and he does so for similar reasons: God’s otherness and nonobjectifiability, the lordship of Christ as the eschatological judge, our absolute dependence upon God’s grace. However we articulate it, the distinction between God and the world means that the kerygma—if it is truly the event in which Christ speaks to us today and so communicates God’s justifying grace to you and me—cannot be conflated with any single human articulation or interpretation. The distinction between kerygma and theology is a distinction between direct and indirect address: “We have made a distinction between christology that is kerygma as direct address and christology that is indirect address and is the theological explication of the new self-understanding of the believer, a critical-polemical explication made necessary by Paul’s historical situation and carried out with the use of a contemporary conceptuality.”3 In the kerygma, God addresses us directly; in theology, we speak and hear about God’s direct address. This speaking and hearing about the kerygma takes place in a specific situation. The terms “historical situation” and “contemporary conceptuality” are Bultmann’s way of saying that every presentation of the kerygma occurs in a particular cultural context—what Bultmann elsewhere calls a “world-picture” (Weltbild)4—and this context always involves a certain language or conceptuality. Every presentation of the kerygma, including those within scripture itself, is therefore already an interpretation:


When, therefore, the science of New Testament theology seeks to present faith as the origin of the theological statements, it obviously must present the kerygma and the self-understanding opened up by it in which faith unfolds itself. And that is just where the problem lurks! For both the kerygma and faith’s self-understanding always appear in the texts, so far as they are expressed in words and sentences, already interpreted in some particular way—i.e. in theological thoughts. Although there are single statements in the New Testament which can be designated as specifically kerygmatic, even they are always formulated in a particular theological conceptuality—take, for instance, that simplest sentence, “Jesus, Lord” (II Cor. 4:5), for it presupposes a particular understanding of the concept “Lord.”5

This means that no presentation of the kerygma can be given universal significance or validity. Though Bultmann does not state so explicitly, scripture itself confirms this judgment by containing an abundance of kerygmatic translations that bear witness to the diversity of cultural contexts out of which the biblical texts and traditions arose. If this is true of scripture, it is even truer for the later creeds and confessions of the church, which are attempts to make sense of the church’s proclamation within a different historical situation. None of these texts can presume to offer timeless and universal truths. They are translations of the truth into a specific cultural-linguistic form. But if we bind the kerygma to any single form, we bind God’s act of revelation to a single cultural context, thereby implying that God does not speak to other contexts and communities. Insofar as Christianity presupposes that the gospel can be translated to every culture or language, it follows that the kerygma “can never be said conclusively” but has to be discovered ever anew.6

Mike S. said…
Hi David, thanks for your blog post and the info about your book (I just placed an order). I hope you don't mind if I mention your current promotion on my own blog. I'm not that active in the blogosphere as of late, but some of my readers/colleagues might be interested.
November 11, 2015 5:31 PM