Global Night Commute, Or, How It Felt To Sleep In Downtown Philadelphia

I am a little late in posting about the event of last weekend, but this is my finals weeks. I will try to keep this brief. Last Saturday, April 29, was the date set for the Global Night Commute for Invisible Children. The Invisible Children campaign concerns a long-running run in northern Uganda in which children are being abducted from their homes in the bush, brainwashed, and forced to fight in a civil war that has killed thousands and is going nowhere. In order to protect themselves, the children commute every night to the nearest city where they sleep in concentration camp-like shelters in order to find refuge for the night. In the morning, they all make the trek back to the homes on foot--for many miles. You can watch their promotional media here. The GNC took place all around the world, but primarily in major U.S. cities. Nearly 60,000 people, in solidarity with the children in Uganda, made the trek to their local cities to sleep overnight as a way of raising awareness about the tragedies occurring in Africa.

A large group from our church, The Well, joined over a 1000 people in downtown Philadelphia to write letters to government leaders and make a public stand in the center of the city, next to the Liberty Bell. Here are some pictures of the event. 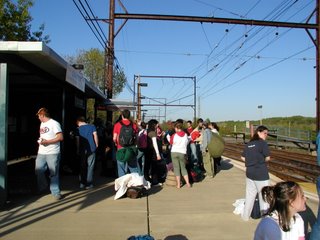 That's the group from The Well waiting for a LONG time for the train to take us down to Philly. 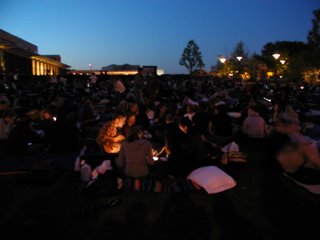 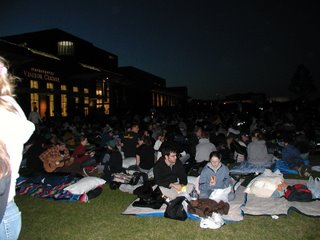 We were technically not allowed to fall asleep because of an ordinance was passed to keep homeless people in shelters and off the streets. By 2 am, though, most people had openly ignored that rule and decided to sleep anyway. The Invisible Children people told us that we might be kicked out by the city if we slept, but of course that didn't happen. 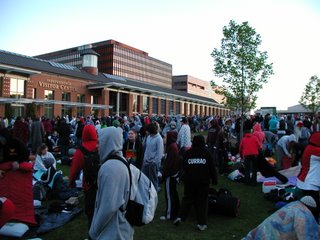 After a very cold night on the hard ground, some without any sleeping bags, many were grumpy and ready to leave. It was a rather surreal experience to wake up on Sunday morning in the middle of the city with pain in your neck and back and hundreds of people all around you. 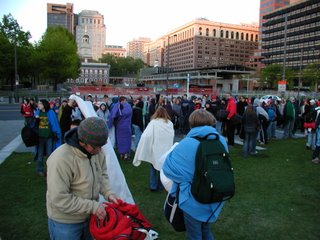 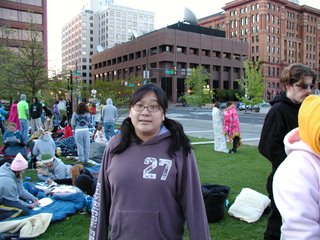 My strange, sleepy wife. I love her. 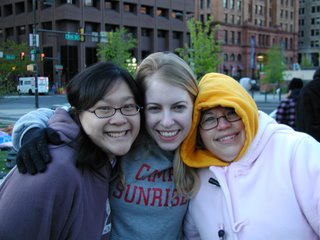 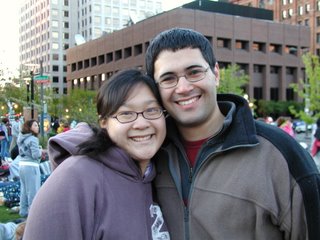 Ah, how cute. We look a lot better than we felt.

(Parenthetically, CBS news in Philly covered the story: "Local Protestors Fight For Peace In Uganda." I've always wanted to be a protestor. Click on the video to the right of the story to see what they showed on TV. On a more disappointing note, the Portland GNC, which was larger than Philly's, resulted in no news coverage. It's a sad time for Portland's media when 1300 people sleeping in Pioneer Courthouse Square are completely ignored. And yet, perhaps that underscores the point. Even we are invisible. How sad but true. America is a nation that makes people invisible.)
Email Post