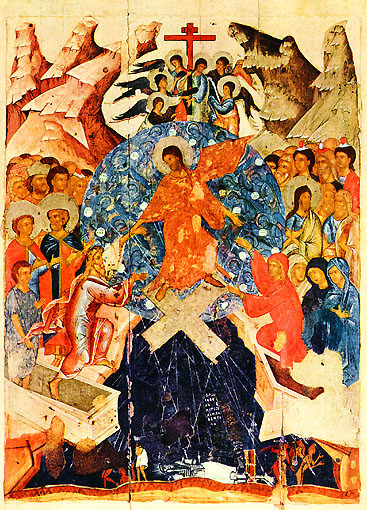 Fifth, and finally, Jesus Christ is the promised Messiah who came to accomplish the work of redemption which only he could accomplish. Consequently, his coming is no Gnostic liberation from our physical bodies or from the material world itself; rather the coming of God in Jesus Christ is a messianic liberation which, in accordance with the whole biblical witness, encompasses the fullness of our creaturely reality. The advent of Christ embraces, disrupts, liberates, renews, and proleptically resurrects the whole realm of created being; no aspect of our actuality, no matter how nugatory, is neglected by the interruptive presence of God with humanity. Immanuel is a divine being-with the ignored, the abandoned, and the oppressed. The advent is a divine ‘option for the poor,’ a messianic embracement of those who are disappeared by the world. Immanuel is ‘God with us,’ but especially with those whom society overlooks, who have no entitlement to divine attention, who linger on the edge of nothingness. Immanuel is God in the abyss.

This is nowhere more evident in Scripture than in the cry of abandonment by Jesus on the cross before he died (Matt. 27:46; Mk. 15:34). Some have tried to lessen the weight of these words by noting that Jesus is quoting the opening line of Psalm 22. Because this psalm ends with a statement of confidence in God, perhaps Jesus actually means to imply his confidence in God the Father. If that is indeed the case, one must wonder why Jesus does not quote from a more confident psalm, like the opening line of Psalm 21, “In your strength the king rejoices, O LORD,” or the opening of Psalm 23, “The LORD is my shepherd, I shall not want.” But Jesus chooses Psalm 22 to express his suffering on the cross.

In order to rightly interpret the cry of Christ on the cross, we must understand the mission of the Jesus as the sole unique mediator between God and humankind. In the mystery of the cross, we encounter the mystery of reconciliation between a loving God and a God-forsaken world. In Genesis, God commands the first humans to not eat of the tree of knowledge, saying, “for in the day that you eat of it you shall die” (Gen. 2:17). But when they do eat of this tree, they continue to live. They don’t die, at least not biologically. Instead, they are exiled from the garden and sent out into a world bereft of God’s presence. This is true death, spiritual death. It is death in God-forsakenness. And it is into this God-forsaken world that Jesus came to live and die in order that we might have life—true life, eternal life. So we read in Romans 5 that “sin came into the world through one man, and death came through sin . . . Therefore, just as one man’s trespass led to condemnation for all, so one’s man act of righteousness leads to justification and life for all” (Rom. 5:12, 18).

But there is still more to be said. The spiritual death that entered through Adam is what some have called the “second death.” The first death is biological, but the second death is spiritual. In the first death, we descend into the earth. In the second death, we descend into hell. The God-forsaken world of death into which Jesus came as our savior is a world falling over the edge into the abyss of hell. And on the cross, when Jesus cried out to God, we come to understand that Jesus has not only defeated the first death, but the second death as well. The death of Christ is the death of death. As Paul writes in 1 Corinthians, “as all die in Adam, so all will be made alive in Christ” (1 Cor. 15:22). Unlike us, who descend into hell and are helpless to escape, Jesus Christ went to the fullest depths of hell in order to rescue us, in order to liberate us from our bondage to sin and death. This is what we confess when we say, along with the creed of the church, “He descended into hell.” In the cry of God abandonment, Jesus confirmed that he died in the place of the greatest sinner in order to rescue even this one from hell’s grasp. In his death in God-forsakenness—as one abandoned by God—he accomplished our freedom from God-forsakenness, our adoption as the children of God.

As we know all too well, however, in the absence of God’s presence, hell makes its presence felt all too often in this world. But the power of the cross extends even here. In his death in God-forsakenness, Jesus died in solidarity with those who felt forsaken in the death camps at Auschwitz, in the killing fields of Cambodia, in the lynchings here in the United States. On the cross, Jesus went to the very depths of forsakenness. He descended into the abyss. He experienced the darkness of damnation, the horrors of hell. But precisely here the mystery of the cross is demonstrated most vividly, in that Jesus not only died in the place of the ones tortured and murdered; he also died in the place of the torturers and murderers. Jesus demonstrated the extent of God’s love in that he died the death—the second death—of all sinners. “While we were still sinners, Christ died for us” (Rom. 5:8). His death is the death of all death. His descent into hell is the destruction of hell. In the cross of Christ, in his death in God-abandonment, “the power of Hell is already broken (down), the locked door of the grave is already burst open” (von Balthasar).
Email Post
Labels: atonement hell liberation

Anonymous said…
the words warmed my heart and yet at the end a question remained.

yes, because of The Messiah, Life is eternal, yet what of those who denied Him to their last GOD given breath(spirit)?

seems "a new heaven and earth wherein righteousness dwells" would be: those whose desire was to serve(Father, not my will, But THY Will Be Done) GOD in their human experience will be with HIM, "Our Father" in "The Kingdom of Heaven" and those who were self-serving will be elsewhere ;-(