Is Obama a Mac and Clinton a PC? 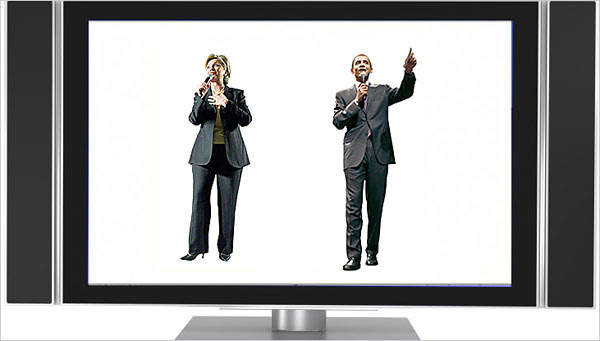 This is a brilliant observation by the New York Times, judging based on the candidate’s respective websites—hillaryclinton.com and barackobama.com.

But what if we take Umberto Eco’s famous 1994 observation into account?

“The fact is that the world is divided between users of the Macintosh computer and users of MS-DOS compatible computers. I am firmly of the opinion that the Macintosh is Catholic and that DOS is Protestant. Indeed, the Macintosh is counter-reformist and has been influenced by the ratio studiorum of the Jesuits. It is cheerful, friendly, conciliatory; it tells the faithful how they must proceed step by step to reach -- if not the kingdom of Heaven -- the moment in which their document is printed. It is catechistic: The essence of revelation is dealt with via simple formulae and sumptuous icons. Everyone has a right to salvation.

DOS is Protestant, or even Calvinistic. It allows free interpretation of scripture, demands difficult personal decisions, imposes a subtle hermeneutics upon the user, and takes for granted the idea that not all can achieve salvation. To make the system work you need to interpret the program yourself: Far away from the baroque community of revelers, the user is closed within the loneliness of his own inner torment.

You may object that, with the passage to Windows, the DOS universe has come to resemble more closely the counter-reformist tolerance of the Macintosh. It's true: Windows represents an Anglican-style schism, big ceremonies in the cathedral, but there is always the possibility of a return to DOS to change things in accordance with bizarre decisions: When it comes down to it, you can decide to ordain women and gays if you want to.”

Granted, Eco’s essay is outdated—and that, perhaps, makes all the difference. But if we take his observations at face value, I would have to say that Obama is a PC and Clinton a Mac—that is, Obama is Protestant and Clinton is Catholic, figuratively speaking. Obama’s campaign is focused more on personal change and voluntary cooperation. Clinton is more rigid and programmatic.

But I would say Eco’s observation no longer applies to the Mac/PC distinction: today it is Microsoft which is programmatic and rigid, and Apple is youthful, dynamic, and personalistic. With that in mind, we can make the following observation: Obama is a Mac and Protestant, while Clinton is a PC and Catholic. Also, just as Catholics and Protestants are both Christians, so too both Obama and Clinton could serve well in the White House.

One final important observation: If we follow the Mac/PC analogy, then we are led to suggest that in the same way the new Intel Macs are capable of running the Windows OS and thus uniting the computing world, so too Obama is capable of uniting the American political world. Just as there is no need to buy a PC anymore, because a Mac can do it all and more, so too there is no need to vote for Clinton anymore, because Obama can do it all and more. Don’t get upset at me. I’m just following the logic.
Email Post
Labels: American politics

Anonymous said…
This is hilarious. But if this is true, considering how many more people use PCs over Macs, then we're looking at a future of disastrous foreign policy. I guess we are looking at that either way though.
February 05, 2008 4:01 PM

byron smith said…
Clinton has all the money. Obama looks like the more expensive option. But then again, he can at least be trusted to be almost corruption-proof.

Dustin said…
Why does no one mention Linux? Is Kucinich (or Nader, as Byron suggests) the Linux of the bunch? An unspoken, overlooked and yet incredibly powerful and progressive force. An underdog who has the potential to change the world as we know it, and yet perceived as an unviable option...
February 08, 2008 4:15 AM

Anonymous said…
I'm in the PC camp (after working two years selling computers with Best Buy/Geek Squad, both PCs and Macs, I do have some experience), since I like the freedom of a PC and have found that plenty of Mac converts just don't know how the hell to use a computer. At the least, Mac users can be annoying -- you have to admit this much :)

Here's a great sketch from VH1's Best Week Ever: