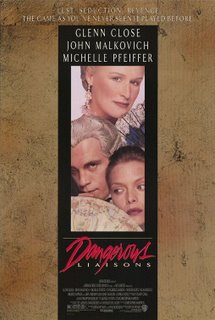 Watching Dangerous Liaisons is an uncomfortable experience: one gets a sick pleasure out of watching people do evil things to others. The film is about aristocratic plots to ruin other people’s lives, usually through sex-related schemes. Based on a stage play, the heart of this film is in the complicated dialogue, primarily between the characters (brilliantly) played by Glenn Close and John Malkovich; Close plays Marquise de Merteuil and Malkovich plays Vicomte de Valmont. The rest of the people in the movie are their pawns, the people they manipulate in achieve their wicked ends. Uma Thurman plays a young virgin betrothed to a man who is an ex-lover of Marquise’s. So Marquise plots with Vicomte, as usual, to seduce Thurman’s character and teach her the ways of “love.” The rest of the film involves more plots, more seduction, more betrayal. What makes the film especially interesting, however, is not so much the plots themselves as what these plots represent. I will discuss two particularly fascinating aspects of this film: aristocratic facades and the supreme “battle of the sexes.”

(1) Aristocratic facades. Liaisons plays with the motif of mask and reality, a theme made all the more effective because of its setting in 18th century France among the aristocracy. This is effective for two reasons: first, period pieces generally highlight the fact that older societies were far more concerned with propriety and social mores than we are today; second, aristocracies are by nature concerned with social privilege and superiority and thus demand a certain kind of presence, poise, and propriety in order to convincingly act the part of nobility. When aristocratic and old European societies are combined, one ends up with a setting ripe with potential for exploring the darker side of nobility. A story like Liaisons plays with the superficiality of this upper-crust society by presenting characters who intentionally use this masked culture as a means to indulge in their self-aggrandizing plots and pleasures.

(2) Gender games, or “the battle of the sexes.” The heart of this film is the male-female conflict that rages from beginning to bitter end. Not only are the plots sexual in nature, but they are born out of a primal gender war over who is the superior sex. Marquise de Merteuil (Close) is the mastermind behind the sexual games carried out by handsome and conniving Vicomte. Early on, she tells Vicomte why she insists on ruining these people’s lives. In short, it’s because men dominate in every sector of society, and women are subjugated by men to meet their needs and desires. Women, she then says, are forced to be crafty in their dealings with men; they have to find ways to reasserting their place in society. This cannot be done in public, or on the surface. Women have to work beneath the surface of society; they have to work behind the scenes rather than on the stage of public opinion. Marquise’s mission in life is to be on top, to assert herself in such a way that the men in her life feel superior, though the true superiority always, in the end, remains with her.

Thus the stage is set for a grand “battle of the sexes.” In this way, the film is like Desperate Housewives set circa 1780. The numerous sexual escapades are part of a larger gender rivalry in which Marquise—representing the cause of the female sex—asserts her feminine authority in the midst of a society that only recognizes male authority. By the end of the film, however, the “battle of the sexes” culminates in a declaration of war by Marquise against Vicomte himself. The partners in crime end up being divided against themselves as part of the great rift between male and female. Without question, this is the most fascinating aspect of this film. The film tells a contemporary story of a woman’s struggle for liberation, but from within the context of aristocratic 18th century France.

However, this promising premise is diffused by the end of the film. When the credits roll, one is left with the implied conclusion that Marquise’s struggle is foolish. Without giving away the end of the film (too much), the story concludes with Vicomte as the reformed man and Marquise as the bitter woman who loses everything in her (misguided?) struggle to gain power for her sex. Granted, Marquise is a conniving character who does plenty of harm to other people, but then so does Vicomte. He is one of the smarmiest characters in the history of cinema. Even so, the finale of the film leaves one feeling sympathy for him. He is the “changed man” who understands the meaning of true love. His cold, smarmy heart is converted and thus his demise in the grip of love is a Romeo-esque tragedy.

In the end, Vicomte’s elevation comes at the cost of Marquise’s humiliation. Consequently, Dangerous Liaisons starts out like a historical feminist film, but it ends up reinforcing the stereotypes and prejudices which feminism wishes to counter. The headstrong woman is humiliated, while the wicked man has a change of heart and receives praise, as if his love covers all past wrongs. The woman is judged and the man pardoned. I am reminded of Hawthorne’s Scarlet Letter, in which the woman receives the public condemnation while the man retains his social status. This makes for a disappointing end to an otherwise fascinating film.

Dangerous Liaisons is a beautifully made film full of lush detail and lavish costumes. The events in the plot are dark and disturbing, offering a stark and provocative contrast to the light and superficial world of French aristocracy. The movie does a great job of playing with the two realms in human interaction—public and private, overt and covert—and in doing so, the movie gives the 1700s a refreshing modern portrayal. In Liaisons, the same struggle for equality and the same dark divisions between public and private that we see in the news every week are replicated in 18th century France. The film reminds us that human depravity is constant throughout human history, that secrets are eventually revealed, and that love is always greater and more satisfying than individualistic self-gratification. Even so, the primary theme of male-female conflict concludes on a sentimental note that ends up, intentionally or not, reinforcing old male-female stereotypes. While the film demands some criticism on this point, it is well worth engaging, and the high level of production and acting make it a pleasure to watch even when the subject matter is less than pleasurable.
Email Post
Labels: movies reviews

Anonymous said…
Fascinating, I'd never picked up on the feminist twist you've given in interpreting this film. Your points are solid and what I say below is not really a contradiction, though I do have a different understanding of the movie.

Firstly, I think this movie is an absolutely beautiful demonstration of fallen humanity lacking God's grace.

The reason I say this is because the Vicomte and the Marquise are in love with each other - the real kernel of the whole film. They are deeply in love, but their awareness of their own sin is so pervasive for them that it leads them to distrust the love they have. Rather than acknowledge the love and live into it they proceed methodically through the movie to destroy each other in a twisted mockery of the perichoretic dance, wreaking havoc in all those around them as they go. At the end the Vicomte is not redeemed so much as he realizes the irony of their situation. Both of them lose everything they truly wanted - each other, and the naked truth is exposed. The vitality and virulence of the man turns out to be fragile and mortal. The poise and beauty of the woman turns out to be shallow and false. The whole society and everyone in it is shown to be a sham a mockery and the one thing which was true and beautiful is ultimately lost because they failed to trust in it.
November 27, 2006 8:54 PM

David W. Congdon said…
Miner: Excellent take on the film! I like your understanding of the story as a parable of love's perversion and the distortion of human relationality. That's really interesting, and full of possibilities that I didn't explore.
November 28, 2006 6:44 AM

The Rush Blog said…
In the end, Vicomte’s elevation comes at the cost of Marquise’s humiliation. Consequently, Dangerous Liaisons starts out like a historical feminist film, but it ends up reinforcing the stereotypes and prejudices which feminism wishes to counter. The headstrong woman is humiliated, while the wicked man has a change of heart and receives praise, as if his love covers all past wrongs. The woman is judged and the man pardoned. I am reminded of Hawthorne’s Scarlet Letter, in which the woman receives the public condemnation while the man retains his social status. This makes for a disappointing end to an otherwise fascinating film.

I disagree with your assessment of the battle of sexes in this film. If anything, this movie reminds me of FUTILE the battle of sexes really is. For ages, men and women have tried to dominate each other through overt or subtle means. This is a problem with humanity altogether, regardless of gender.

Valmont's "redemption" came too late for him. The Marquise de Merteuil still managed to destroy him, just as he managed to humiliate and destroy her. All because both wanted to exert control over the other for their own personal reasons.