Bergman and Antonioni meet in purgatory

SCENE: A lonely strip of shoreline, empty but for a solitary figure. The water is motionless, the sky is cloudy, daylight slight and wintry, a continuous dusk pervades. Purgatory, it turns out, looks very much like Faro Island, a fact whose irony is not lost on its former resident, the recently deceased INGMAR BERGMAN, the solitary figure alone on the beach. Wearing his standard fisherman's wool hat and tight, bemused pout, the late writer-director surveys his eternal reward.

Bergman: More bad comedy from a bad comedian. God punishes me with a hell indistinguishable from mortality! Maybe I should've lived in Miami...

Another figure emerges on the horizon, startling B into hushed whispers.

Bergman: But who? A new punishment? An ex-wife? (shudders) E-E-Elliott Gould? 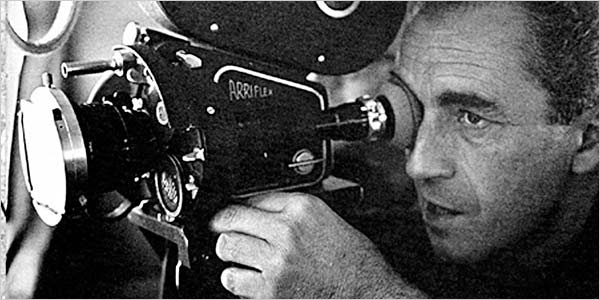 His slow gait and aristocratic bearing reveal the approaching figure to be MICHELANGELO ANTONIONI. Even relieved in the afterlife of some of his stroke-induced disability, he's taking a long time to reach B.

Read the comical fictional dialogue between Bergman and Michelangelo Antonioni—two great filmmakers who died within a day of each other—here.
Email Post
Labels: movies