Living out of the future: a Lenten homily

Mark 10:13-16:
13 People were bringing little children to him in order that he might touch them; and the disciples spoke sternly to them. 14 But when Jesus saw this, he was indignant and said to them, “Let the little children come to me; do not stop them; for it is to such as these that the kingdom of God belongs. 15 Truly I tell you, whoever does not receive the kingdom of God as a little child will never enter it.” 16 And he took them up in his arms, laid his hands on them, and blessed them.

Today’s passage is from the lectionary text for the Wednesday before Palm Sunday. It is a passage we all know very well. This is the Jesus captured in old Hollywood movies and low-quality watercolor paintings and heart-warming Hallmark cards. It’s the saccharine, sentimental Jesus of American religiosity, the anodyne Jesus that we love to embrace because he makes no demands of us. How ironic, then, that this pericope is located between two of the hardest, most challenging, passages in all of Mark’s Gospel. Directly above we read Jesus’ unequivocal rejection of divorce and remarriage, and directly below we read his challenge to the rich ma

n, “Sell what you own, and give the money to the poor,” followed by: “How hard it will be for those who have wealth to enter the kingdom of God!” In light of the fact that Jesus had just said that the kingdom belonged to children, it’s little wonder that the next verse reads: “the disciples were perplexed at these words.”

Not that our text for today lacks a challenge for us. It’s the well-known one: to receive the kingdom of God like a little child. What exactly does that mean for us? Again, we know the Hallmark version: we must have childlike trust in God, a humility and innocent naiveté when coming before God. That is at least the usual message. It’s not necessarily a bad one, but like many of Jesus’ sayings in the Gospels, it is either ignored out of a sense of its impossibility or forgotten because it has been sentimentalized.

I find an alternative possibility in the work of the German martyr and Lutheran theologian, Dietrich Bonhoeffer. In his habilitation thesis, one of his least read works, he reflects on what it means to be “in Christ.” He says there are two ways of being in Christ. One way is to always be concerned with trying to deal with the past. It is to be caught up in endless self-reflection. This is what Bonhoeffer calls the way of the conscience. In the pursuit of a “clear conscience” in the present, one is forever living in the past; the present thus eludes him or her. The other way is to be caught up, not by the past, but by the future, by what is “yet to come.” This is a life lived without endless self-reflection, without turning inward or backward. Bonhoeffer calls this the way of the child. “The child,” he says, “sees itself in the power of what ‘future things’ will bring, and for that reason alone, it can live in the present.” Those who are “mature,” he says, the adults “who desire to be defined by the present, fall subject to the past, to themselves, death and guilt. It is only out of the future that the present can be lived.” 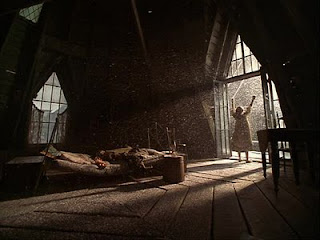 So what exactly does this mean? What does it mean to say that the child lives from the future? I think we have a pretty good illustration of this in the notion of “fantasy” or “make believe.” Children are distinguished by their boundless imagination, their ability to envision an alternate reality and to live into this vision without restriction. They have none of the cynicism and “realism” to place a gap between themselves and their imaginations. They do not stand at a “healthy” (healthy only to adults) distance and consciously reflect on the way in which they are constructing this world of “make believe.” And remember: the categories of “true” and “false,” “real” and “fake,” are adult descriptions; they have no meaning in the world of the child. In the movie, The Little Princess, the main character is a girl who has apparently lost her father in the war. She and the other girls are stuck in an oppressive boarding school. Instead of getting lost in the past, they develop a community of imagination. Their social fantasy frees them from a present that is stuck in the past and allows them instead to live out of the future, and thus truly in the present.

By contrast, we all know the world of the adult, of the mature conscience. The adult is the one who is burdened by memories of past sins, past hurts, past achievements, past failures, past friends, past enemies—always the past. At the same time, the adult is always trying to live in the present. The adult tries to recompense for past wrongs, repay past debts, and restore old friendships. The adult tries to establish the future instead of living out of it. In this light, it is remarkably fitting that the story of Jesus and the children is bracketed by stories of marriage and money—for no other issues define us more as adults than these! In both examples, we are burdened by our past, struggling with the present, and desperately seeking to establish a better future. It is especially fitting that Monday is Tax Day. It symbolizes the adult reflection on the past (i.e., last year’s income) and the preparation for the future.

But Jesus says that we must come to him like little children. Only the child enters the kingdom of God, because only the child is free to enter into God’s imagination. The child is unencumbered by the past and unconcerned with trying to create a reasonable future. The child is uninterested in the adult separation between reality and fantasy. He or she simply lives from the freedom of the future that is entirely open to the new and unexpected.

We are called to be a church of little children. God asks us to freely live in God’s imagination, what Jesus calls the kingdom of God. This isn’t any message that Hollywood or Hallmark can provide. It is found only in the message of Easter that the future has come into our midst, that even death is part of the past from which God frees us.

Chris TerryNelson said…
Unadulterated proclamation of the word. Thanks David.
April 14, 2011 12:24 AM