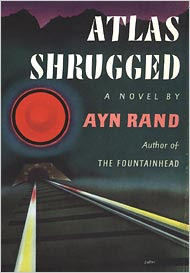 Alan Greenspan was an early admirer of Ayn Rand, whose circle he joined in the 1950s.

The book is “Atlas Shrugged,” Ayn Rand’s glorification of the right of individuals to live entirely for their own interest.

For years, Rand’s message was attacked by intellectuals whom her circle labeled “do-gooders,” who argued that individuals should also work in the service of others. Her book was dismissed as an homage to greed. Gore Vidal described its philosophy as “nearly perfect in its immorality.” ...

Mr. Greenspan met Rand when he was 25 and working as an economic forecaster. She was already renowned as the author of “The Fountainhead,” a novel about an architect true to his principles. Mr. Greenspan had married a member of Rand’s inner circle, known as the Collective, that met every Saturday night in her New York apartment. Rand did not pay much attention to Mr. Greenspan until he began praising drafts of “Atlas,” which she read aloud to her disciples, according to Jeff Britting, the archivist of Ayn Rand’s papers. He was attracted, Mr. Britting said, to “her moral defense of capitalism.”

Anonymous said…
Because I read The Fountainhead first, I was actually pretty disappointed with Atlas Shrugged (at least as a piece of literature).

Of course, Rand's "moral defense" of capitalism isn't, by and large, a defense that she originated -- it goes back at least as far as Malthus -- but the way in which she defends her, as she called it, "objectivism," through narratives (The Fountainhead, Atlas Shrugged, and Anthem being her big three pieces of fiction) does make her somewhat unique as most "acclaimed" literature tends to lean more to the left than the right.
September 22, 2007 1:03 AM

Anonymous said…
NOW I understand. A couple of weeks ago I watched a feature film, "The Passion of Ayn Rand" (a horrible flick, actually; I wanted to see it mainly because Helen Mirren is the lead; the film is about the affair between Rand and Nathaniel Brand), and there was an unnamed minor character in it who I immediately thought looked like a young Alan Greenspan.

I have to admit that the film made me want to reread Atlas Shrugged. So I dusted off my 35-year old college copy and jumped in. But I quickly discovered that I was as alternately bored and disgusted as I'd been when I read it as an undergraduate. Frightening to think that some of the movers and shakers of our world--Greenspan, for example--lap this stuff up.

One final observation. Over the years, I've discovered that students of mine who are dyed-in-the-wool Randians tend to be some of the most anti-intellectual kids I teach. They tend to disdain without having read any thinker save Rand, accusing them of intellectual and/or moral dishonesty, cowardice, etc. It's a strange and scary attitude, and it's often made me wonder just what the psychological motivation is for admirers of John Galt.
September 22, 2007 3:20 AM

David W. Congdon said…
I enjoyed both Anthem and The Fountainhead, even if I deplored the way Rand used them as vehicles for her message of individualism and greed. But I simply couldn't finish Atlas Shrugged. I think a big part of it is that it felt like I had already read it. That's the problem with literature that borders on propaganda: it's not very original or fresh. Atlas had the same kind of sex scenes, the same kind of protagonist, and the same basic "message" as The Fountainhead — except that the message was just more obvious and the book was more like propaganda.

Probably the best summation of her views comes at the very end of Anthem, where the last word is: EGO. She uses the setting of a collectivist dystopia as a way to celebrate the individual. I think it would be interesting to compare this work with other dystopias that come to different conclusions. In particular, Brave New World and The Giver. The former creates a dystopia based around individual pleasure that ends in tragedy, and the latter creates a dystopia not unlike Anthem in which remembering one's collective history is the key to liberation, not escaping from the collective altogether.
September 22, 2007 7:37 AM

Don Hendricks said…
I read The Fountainhead when I was a new Christian, and actually stopped attending church for three weeks trying to be a rugged individualist. I was and am unsuited for the role.
September 22, 2007 10:31 AM

Anonymous said…
The Greenspan connection is interesting but not surprising. I have never read Ayn Rand nor have I ever had the urge to. To be frank, I hope I never do.
September 22, 2007 12:28 PM

Anonymous said…
I had to read this for a course last year, and I bloody well hated it. I've never read a book that is more obviously about driving a singular point home. Faugh.

If anyone does read it, note that each and every "hero" is basically the exact same person.