Madeleine L’Engle, the author of the classic children’s book, A Wrinkle in Time, died last Thursday, September 6, of natural causes. L’Engle was a prolific author who composed fiction for both children and adults, nonfiction, and poetry. She has been recognized for her literary achievements many times over. In addition to the Newbery Award for A Wrinkle in Time, L’Engle has received the Sophia Award (1984), the Regina Medal (1985), the ALAN Award (1986), the Kerlan Award (1990), and the National Religious Book Award. Her death is a deeply sad event for her many devoted readers. One of her most devoted readers is my wife, Amy, who has read and owns almost every single book that L’Engle has published. Amy has made it her goal to collect all of her works, and she is only two or three away. For those of you who do not wish to collect her works for yourself, you may always visit the Wheaton College Special Collections, which has housed the Madeleine L’Engle Collection since 1976. In light of her death, the Wheaton College Special Collections has created a special online photo gallery.

While her Time Quartet is the best known of all her books, L’Engle has many other works that are equally as good. One of the distinctive features of L’Engle’s fiction is her carefully constructed families which form the characters for most of her young adult fiction. The Time Quartet centers on the Murry-O’Keefe family, while the Austin family is the focus for a number 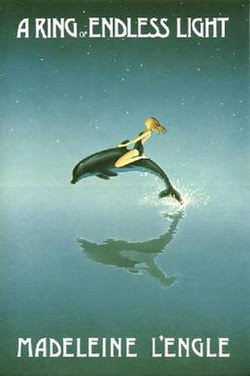 of other books, including Meet the Austins, The Moon by Night, and my wife’s favorite book by L’Engle, A Ring of Endless Light. L’Engle identifies these two families as Kairos and Chronos, respectively. There is also a list of characters who bridge Kairos and Chronos, and thus weave in and out of the various books. In addition to her young adult fiction, L’Engle has written the autobiographical Crosswicks Journals, and the Genesis Trilogy, and numerous other works of fiction, nonfiction, and poetry. My wife’s favorite adult fiction work is A Live Coal in the Sea, which is one of two books centered on the character of Camilla Dickinson.

My favorite works by L’Engle are her books of nonfiction, particularly Penguins and Golden Calves, The Rock That Is Higher: Story as Truth, and Walking on Water: Personal Reflections. These books reward multiple readings. L’Engle’s wisdom and spiritual insight is on full display in these works, as she discusses art, literature, faith, Scripture, worship, and love in ways that are both deeply moving and profoundly theological. In her book on icons and idols, Penguins and Golden Calves, L’Engle coins a word that I have been using for several years now to describe the brand of evangelicalism which is both fundamentalist and literalist. She writes in response to some women who spread lies about her in the 1990s:

These women, like many of the attackers, call themselves fundamentalists, but that is not a good use of a perfectly good and useful word. I, too, am a fundamentalist, though the word is too often used pejoratively, to describe anybody who disagrees with a particular brand of Christianity. I believe the fundamentals of the faith. ... I do care about the fundamentals, which to me are the rock of love on which I stand, the Love that was great enough to create not only the magnificence of the starry sky but each one of us—the Love that will never let us go until we become what our Maker wants us to be.

So yes, I think of myself as a fundamentalist, that is, someone who still cares about fundamental things, like truth and friends and imagination and love and story and honour and compassion, none of which seem important to the fundamentalists, or literalists, or whatever word we currently use. ... [P]erhaps we need another word that is simpler than fundamentalist/literalist. A word like fundalit.

Throughout this wonderful little book, she reflects on our images of God (using Amma as well as Abba), the story of Scripture, and heaven and hell. Her other works are equally as illuminating. But I think the most appropriate way to remember L’Engle is through her poetry. She published a few works of poetry in her life, but her writing style is poetic through and through. And poems appear in most of her books at some point. Recently, her poems were collected in the book, The Ordering of Love. The following is a previously uncollected poem which, like most of her poems, focus upon the crucified and risen Christ.

God is dead? Well, of course God is dead!
Where have you been? Did you not see the dark
Cover the hill and strike against the cross?
We killed him then two thousand years ago
And once was not enough. We kill him now
In each denial, each unloving act.
Daily we kill him, trampling on his name,
Spitting on his word. And we are told,
And rightly, that he died between two thieves
And not two candles shining on an altar.
And yet there, too, perhaps most terribly,
He’s crucified each day by priest and those
Who take him, unaware of all the clouds
Of witnesses encompassing them in song
And prayer, who kneel there coldly unaware
Of those who suffer in the adjoining pew.
We do not understand his feast; we live
Again his crucifixion, but forget,
Each time we crucify him there again
Between those candles whose bright flame is lost
To darkened eyes, that when he died for us
After three days he rose, and still for us.
We kill him, but we cannot keep his light
From blazing forth in flame for every one
Who fouls his word and calls him dead and cries
In loneliness because his name is lost.

And yet, receiving now my heart’s true food
I feel his light rush coursing through my blood.
Nourished by his spilled wine and broken bread,
I know that my Redeemer is not dead.

Derrick said…
Thanks for this article David. I'm quite sad to learn of this great author's death. I loved the Time Quartet, especially the seminal Wrinkle in Time, and honestly there are few writers who have captured my imagination like she has. People like her rekindle my hope that Christian authors can actually be creative and imaginative (unlike some of the tripe that passes itself off nowadays as a quick Christian Supply sell just because it is labeled Christian--that goes for music too).
September 12, 2007 2:37 AM

Nathan Pralle said…
L'Engle opened me to a whole different world of fantasy that I wasn't even aware existed. Starting when I was much, much younger, it took many-a reading through Wrinkle before I even understood half of what she was trying to say in it, and it wasn't until I read the entire Quartet that I truly saw what her vision was for the story. A remarkable woman and incredible mind.
September 12, 2007 9:54 AM