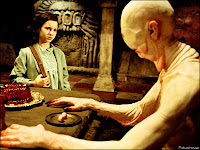 Stephen King is a regular contributor to Entertainment Weekly, my pop culture magazine of choice. In his columns, he consistently makes thoughtful and even profound insights. Probably my favorite piece by him was an article from last year on the Harry Potter series, in which King reflects on why children “get” the stories in a way that adults just don’t, a comment echoing a similar statement by C.S. Lewis regarding his Narnian books. King wrote in that article: “Kids are always looking for the Ministry of Magic, and they usually find it.” Other good columns by King include ones on the simple joy of entertainment, on our culture’s fascination with violence, on the “art” of the blurb, and the problems with banning violent videogames.

Most recently, however, King has written about why big Hollywood horror films are so rarely scary. He writes:

Big movies demand big explanations, which are usually tiresome, and big backstories, which are usually cumbersome. If a studio is going to spend $80 or $100 million in hopes of making $300 or $400 million more, they feel a need to shove WHAT IT ALL MEANS down the audience's throat. Is there a serial killer? Then his mommy didn't love him (insert flashback). A monster from outer space? Its planet exploded, of course (and the poor misunderstood thing probably needs a juicy Earth woman to make sexy with). But nightmares exist outside of logic, and there's little fun to be had in explanations; they're antithetical to the poetry of fear.

King is on to something here, and it goes well beyond horror. The best films—hell, the best stories—are ones that are liberated from any need to conform to some external logic. Chesterton, Lewis, and Tolkien all have beautiful statements about why they love the genre of fantasy for this very reason. Fantasy does not “make sense” according to any external standard; rather, it makes perfect sense within its own narrative world, and once we enter that world, we see that fantasy tells us the truth. Fiction and fantasy are not “pleasant lies” that divert us from reality; they rather speak the truth about reality in the most compelling way. As Chesterton said, the old legends about dragons are not true because dragons really exist, but because they tell us that dragons can be defeated. The point is applicable to Scripture as well: once we think the Bible has to conform to the logic and experience of the empirical world—and so, e.g., requires verification from archeology and modern science—at that moment it ceases to be God’s Word, i.e., it becomes “tiresome” and “cumbersome,” a place where “there’s little fun to be had,” to use King’s language.

While King does not explore why Hollywood keeps shoving explanations down our throats, I think the main reason is that Hollywood is trying to cater to a crowd that has largely lost its imagination, or at least this is how Hollywood perceives them. Youth today are cynical and expect a story to be “realistic.” While that’s true in a way, Hollywood has forgotten that there are more options beyond naive fables and brutal realism. A film like Pan’s Labyrinth shows a kind of third way: fantastical, and yet realistic; fictional, yet deeply full of truth; scary precisely because it refuses to conform to any external logic.

Where King goes astray is in the way he pits The Strangers (which he liked) against the new X-Files that comes out today (which he thinks he won’t like). While I haven’t seen the new X-Files movie and cannot claim to speak on its behalf, he misconstrues the series as horror and seems to think that its big-budget status means that the producers will throw explanations at us in the way other bad films do. But any watcher of the series will know that it’s the very lack of explanation which makes the stories so compelling. Be that as it may, King’s article is otherwise on target.
Email Post
Labels: movies

Dave Belcher said…
Yeah, just saw X-Files last night -- King's definitely out in left-field on that one. What a great film, and believe it or not scary too!

I nevertheless appreciate the sentiment though...as I sat watching previews, I couldn't help but think how predictable one particular "scary" horror flick looked. I don't think I flinched...this works in other directions too, though -- in a preview for some action-packed thriller, I didn't get all manly and think how much I wanted to see two guys beat each others' brains in...totally unphased.
July 26, 2008 10:27 AM

Thanks for this post. Insightful and readable, as usual.

You're right to say we suffer from a collapse of imagination. And I'm sure you would agree bad movies are made not only for but also by people who can't think except to calculate.

But I don't know if "external logic" is the way to talk about that-to-which-a-"realistic"-story-conforms. We have to insist on the non-reducible externality of reality, I believe. Fantasy works not because it is illogical, but because it transports us out of the world we have experienced and so have come to "know" (a pseudo-knowledge which is really only naively presumptive expectation arising from a negligent half-awareness of what has already happened to us), and shows us that even in a world of (what would be to us) alien experiences where unimaginably good a bad things happen, there remains the lex or logic in which that world, like ours, coheres. Loyalty, truthfulness, humility on the one hand and treachery, arrogance, malice on the other - these realities persist and are recognizable as such in all imaginable worlds. We can imagine a world in which parents eat their children, but we can't imagine that such a thing is good .

One other point. While I agree that many evangelical readings of Scripture are tiresomely and cumbersomely unimaginative, I don't think that we want to say that "archeology and modern science" have nothing of consequence to offer our readings. Agreed, if we spend our exegetical time proving that Noah did in fact build an ark and that it can in fact be found on this mountain, or that Jesus really did walk on the water, or that Jonah was actually swallowed by a fish, or that God did create the world in 6 days, we will go terribly wrong, as we would be doing violance to the text's meaning. But if someone turns up the bones of Jesus, then our faith is in vain.
July 28, 2008 11:00 AM