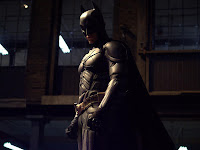 In light of my recent response to James Bowman on the issue of movie heroism, it seems only appropriate that the new Batman film, The Dark Knight, represents one of the most complete rejections of traditional heroism. After seeing the film on Friday, I hope to have something worthwhile to say about it sometime soon. In the meantime, here is a quote from the New York Times review of the film. I don’t entirely agree with the assessment, but the description of the film as a “a postheroic superhero movie” is precisely right.

This is a darker Batman, less obviously human, more strangely other. When he perches over Gotham on the edge of a skyscraper roof, he looks more like a gargoyle than a savior. There’s a touch of demon in his stealthy menace. During a crucial scene, one of the film’s saner characters asserts that this isn’t a time for heroes, the implication being that the moment belongs to villains and madmen. Which is why, when Batman takes flight in this film, his wings stretching across the sky like webbed hands, it’s as if he were trying to possess the world as much as save it.

Anonymous said…
I am looking forward to you thoughts on the film. Here are mine: http://textcommunitymission.wordpress.com/2008/07/20/the-gospel-according-to-bruce-wayne/
July 21, 2008 2:10 PM