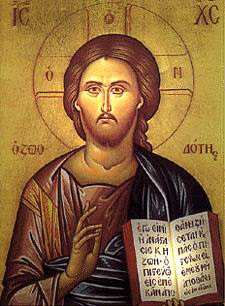 Fourth, the vision of the New Jerusalem is logocentric. At the center of Mic. 4:1-4 stands the statement: “For out of Zion shall go forth instruction, and the word of the LORD from Jerusalem.” The organizing reality at the heart of Micah’s eschatological vision of the new community is the word of the Lord, the verbum Domini, the logos of God. The word is what comes down from the mountain of Zion to all peoples; the word is what arbitrates between strong nations, establishing the communio pacis and instructing the world in the ways of God’s law; and the word is the telos of the nations’ pilgrimage, the heart of the eschatological new creation. The vision of the ekklesia is thus thoroughly logocentric: the community identified by the covenant of peace is centered on the logos, the word which calls the community into existence and commissions the people of God for the ministry of reconciliation.

The word is primarily one of instruction in the ways of the Lord. The word of God is a prophetic word of divine wisdom that inculcates a new existence in accordance with the law (cf. Jer. 31). In Micah’s vision this pursuit of wisdom is no longer limited to a select group of people—an exclusive group of those who have received the word of the Lord—but rather all the nations declare their desire to “walk in his paths.” The word does not belong to any particular family, tribe, or nation; instead, the word goes forth as an event for all peoples, for every family, tribe, and nation. The word of the Lord is a speech-event in which the God of Jacob actualizes the law in the eschatological moment, thereby establishing justice between nations and peace among the people of the earth. In the eschatological event of divine speech, the telos of the law—“all the families of the earth shall be blessed” (Gen. 12:3)—is fulfilled in accordance with God’s eternal will: “for the mouth of the LORD of hosts has spoken.”

At its heart, the verbum Domini is a word of life. As instruction, the word is also liberation; as judgment, the word is also reconciliation; as imperative, the word is also indicative. The word is both declarative and creative at the same time. In that the word instructs humanity, the word constitutes a new human subject in correspondence to this speech-event. The word places a clear demand upon the human person who hears and receives this word, but the impossibility of obeying the word is rectified in the event of divine speech: “I will be with your mouth and teach you what you are to speak. . . . I will be with your mouth and his mouth, and will teach you what you shall do” (Exod. 4:12, 15). The divine event of the word thus actualizes the ontic reality of a new humanity in correspondence in God. The logos establishes the human person who hears, receives, understands, and responds to the verbum Domini (cf. Isa. 6:9-10, Matt. 13:13-17, 16:15-17; Jn. 8:47). The word of God is the act of God in which God “makes history in the supreme sense” (Barth, CD I/1, 144). The most concrete instance of this occurs in Ezek. 37, in which the prophet is commissioned by God—in fact, transported by the hand of the Lord—to prophesy to the valley of dry bones: “O dry bones, hear the word of the LORD. Thus says the Lord GOD to these bones: I will cause breath to enter you, and you shall live” (Ezek. 37:4-5). The word of the Lord is the operative agent throughout this passage, as the basis for both the prophetic utterance and the event of new life: “as I prophesied, suddenly there was a noise, a rattling, and the bones came together, bone to its bone” (Ezek. 37:7). The prophet is an acting subject who speaks, but it is the word of the Lord which constitutes this speech as divine speech and constitutes the dry bones as “a vast multitude,” the “whole house of Israel” (v. 10, 11). The word of the Lord is thus “living and active” (Heb. 4:12), and by in the event of the word Christ sustains “all things” (Heb. 1:3). The word pierces the heart and “divides soul from spirit” (Heb. 4:12), but it also restores, heals, and breathes new life into dead matter. The verbum Domini brings life out of death, bodies out of bones, breath out of the four winds, Israel out of the grave, and humanity out of hell.

The community of those called by this word is therefore a logocentric community: the ekklesia exists as a community constituted by the word, filled with the word, directed by the word, and ordered toward the word. The church is a creatura verbi, a communion constituted by the word as witnesses to the word. The church is a koinonia of those defined by the covenantal word of grace and who proclaim this word in faithful obedience to the missio communionis. At the center of the communio sanctorum stands the Word of God, Jesus Christ, who radiates his presence outward through Scripture, through the community, and into the world. The covenantal community testifies in word and sacrament to the Word at the center of the world. In the end, finally, we see in Micah that the Word is the center not only of the covenantal people of God, but also of the entire creation as the theater of the Word. This then is the mission of the ecclesial community: to bear witness to the fact that Jesus Christ, the true Logos of God, the Verbum Domini incarnate, has reconciled the world to himself, and consequently all of creation, whether it wishes to be or not, is constituted as the logocentric theater for the manifestation of God’s gracious will to be Deus nobiscum—God with us.
Email Post
Labels: ecclesiology Word of God